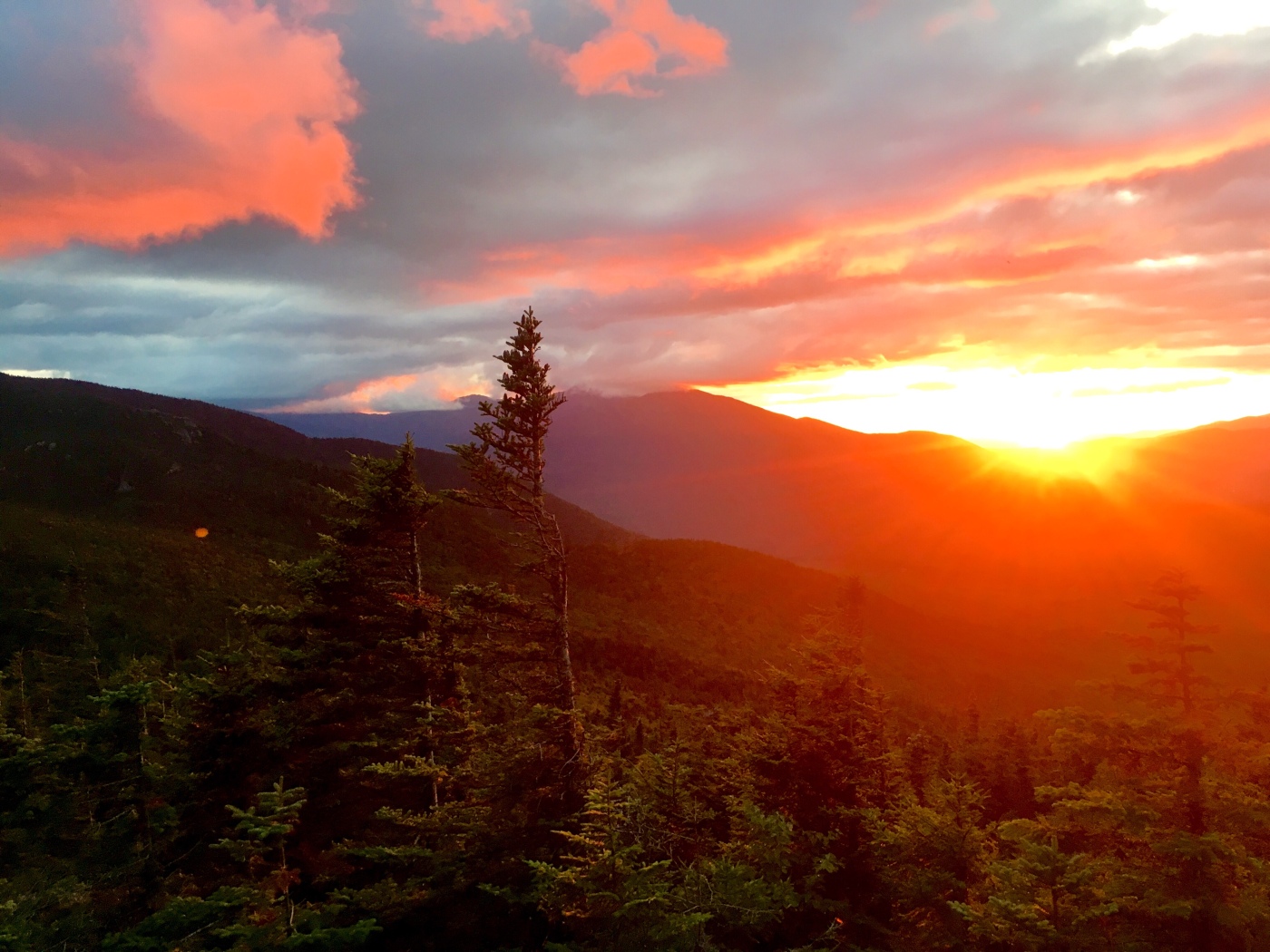 Right now I’m in Stratton, Maine, having taken a rest day to escape some nasty rain. Nothing has made me feel more like a Southerner than the weather up here, which is basically like Virginia in late October and November – except right now it’s supposed to be summertime. I’ve made it through some difficult stretches of trail, and I’m now only 188 miles from finishing. Yesterday I crossed the 2000 mile mark.

So far the White Mountains have definitely been the hardest stretch of trail for me. The climbs are massive and often require going straight up large slabs of rock, which takes a lot of time and effort. It’s also pretty dangerous and I’ve taken a few falls, luckily not amounting to anything more than some scrapes and bruises. Throughout most of the trail climbs have had switchbacks, which make them longer but more gradual, but up here they just run the trail tortuously straight up the mountain. Before the Whites I was able to do at least 20 miles basically every day, but now I haven’t been able to do much more than 15 due to exhaustion or running out of daylight or both. It’s been really frustrating to have to slow down so much this close to the end, but I’m hoping to speed up again in the next few days. Part of that was because of the steepness of the climbs, but it was also because the terrain of the trail was really rough. I can’t count the number of times I had to climb up a wet rock face thinking about how my parents always told me never to climb on wet rocks, and now I was doing it with a pack on that’s basically the equivalent of a homicidal five year old trying to pull me backwards.

This area is also famous for views, which have been excellent but honestly not much better than anything you could see from big mountains down South. The Whites are also full of tourists and have things called “huts”, which are basically very expensive bed and breakfasts that you hike to. In a way they’re good for thru hikers because they have running water (but not showers), and we can often do some chores for free food or the chance to sleep on the floor. But they also change the feel of the trail in a way I’m not sure how to describe and put us in stark contrast with the people hiking a few miles from the road and paying $180 for a bunk.

Southern Maine has so far been as beautiful as The Whites but a lot quieter. Unfortunately, the terrain didn’t instantly become easy the way that I had hoped, but it’s gradually getting better. I’ve got about one more day of big, rocky climbs and then it will be pretty flat for a while.

Losing my wallet, my prescription going to the wrong place, and everything else that went wrong really forced me to ask for help, which is really difficult to do. I have a really bad tendency to avoid asking for help at all costs, and even to turn down help when it’s freely offered and would cost the other person next to nothing. It mostly makes me feel like I’m beholden to someone and like they have power over me, or at least like I’m weaker than I should be. In this situation I had to rely on my mom, my old roommates, friends, a hostel owner, and fellow hikers to help me sort things out and I literally couldn’t have gotten my shit together without everyone’s help. Ultimately in that way it was actually kind-of good for me because I think that being able to ask for and receive help is an important skill. Life is too hard to get by without other people, and honestly even if you can there’s no point in it. It seems like the most important thing is to remember the help you’ve received from others and pass it on as best you can.

I’ve been on trail for well over four and a half months now, and I feel like I’m finally qualified to throw some critiques of the hiker community out there. As much as I like some folks out here and as wonderful as some of them have been to me, the hiker community is probably my least favorite thing about being on trail and I think that there’s a lot of things that could be improved.

I don’t really like the way that long distance hikers in the “hiker community” tend to approach the idea of being a hiker. People take it way too seriously for a sport that is literally just walking in the woods. Some people just go walking in the woods for a lot longer than others, and that’s how you become a thru hiker. Thru hikers often look with disdain on people doing day hikes or backpacking sections of the trail, even though most of the time we literally are those people. We’re not that special just for being able to drop everything for months and go farther. There’s also an intense obsession with gear and pack weight. My pack is one of the heavier ones out here (35 lbs with full food and water), and many people have made comments about its weight or various things I have in there that they feel like I could get rid of. Some hikers actually gave me shit once because I bought a full size tube of toothpaste (which has lasted me 1,500 miles and only weighs 2.4 oz) instead of travel size. But at the end of the day my pack isn’t a dangerous weight and I’m the one who has to carry it, so I get really frustrated when anybody feels like it’s their business to comment. I tend to go reasonably fast, so I especially enjoy when people say something about my pack weight and then realize I’m faster than them regardless. I think the ultralight fascination is especially alienating to people outside the backpacking world (like me six months ago), who may not have tons of experience or the means to purchase the much more expensive ultralight gear items. Sure it’s important to be conscious of your gear weight, but at the end of the day it’s about your priorities – and your pack weight doesn’t have to be at the top of the list. One of the nice things about hiking as a sport is that it’s so flexible. You can go one mile or 2,190 miles and you’re still hiking. I think it’s time for everyone to lighten up about it, let everyone do their thing, and enjoy it a little more.

While the hiker community is generally at least “not conservative”, I think it gets a lot more credit for being progressive than it deserves. People seem to be vaguely aware that oppression does, indeed, exist and probably vote, but generally don’t seem particularly interested in making anything better. Occasionally someone will note that the trail is about 65% cisgender, heterosexual white men, but I don’t know that I’ve heard a single person question why or ask what could be done to make others feel more comfortable and safer on trail. I’ve also heard a lot of oppressive comments and behaviors go unaddressed out here because everyone is just trying to avoid confrontation. But that leads to the perpetuation of the issues and keeps the trail an unwelcoming place for anyone that’s not a straight, cisgender, white man. It’s definitely been tough for me, and I’m sure it’s tough for others as well. It’s especially frustrating that the hiker community gets so much praise for being “progressive” and “accepting” when it’s really not.

Overall these past two weeks or so have been really, really tough between the terrain and literally everything going wrong. But I’m getting back on track now, and I have (comparatively) flat terrain to look forward to, and the end is in sight. After I finish I’ll slowly make my way to NYC, where I’ll visit friends for a week or so before heading back to Virginia. Then I’ll be staying at my mom’s house for a minute while I look for a new job and pick a new city to live in. 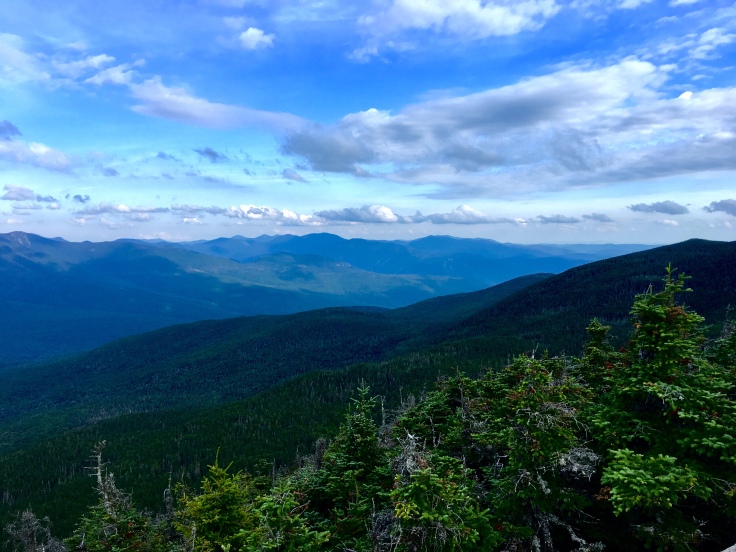 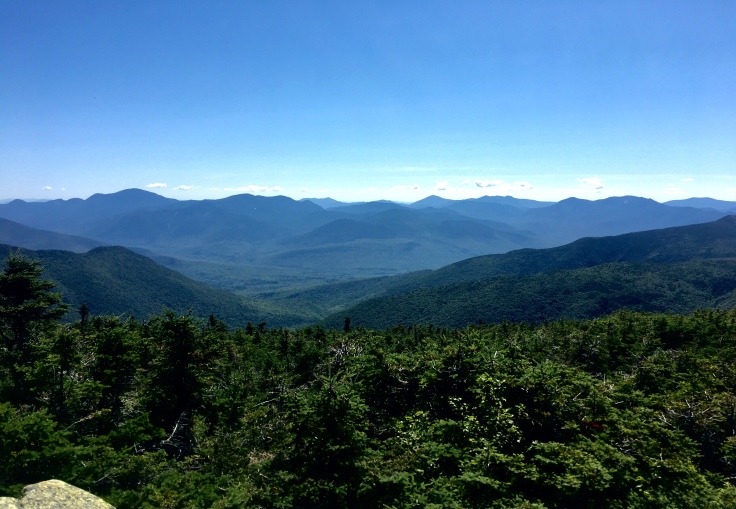 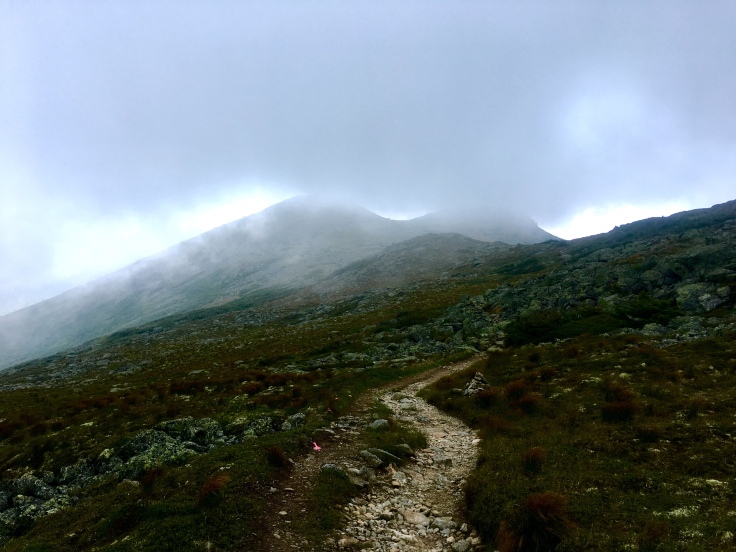 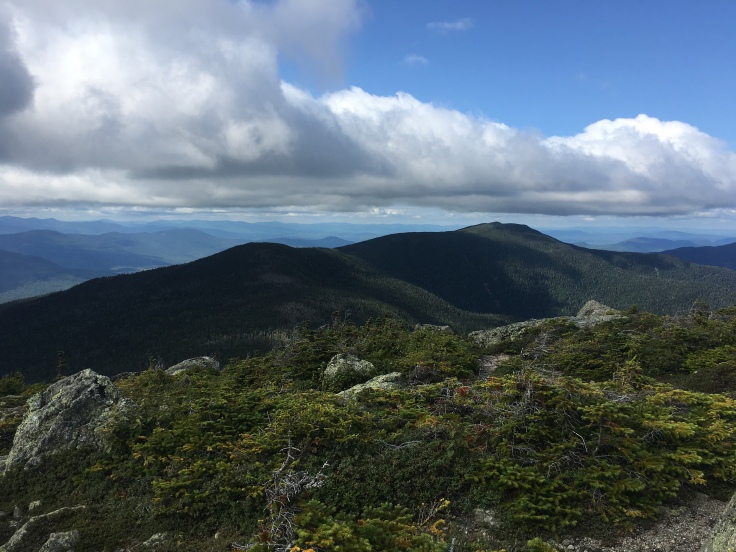 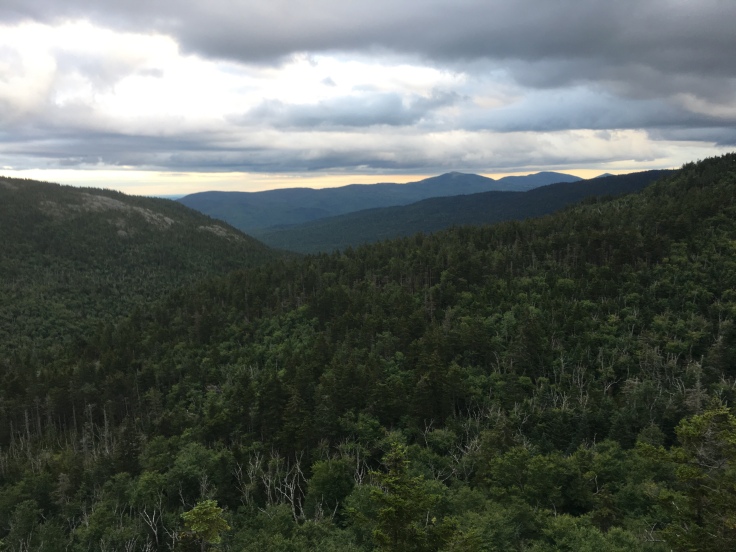 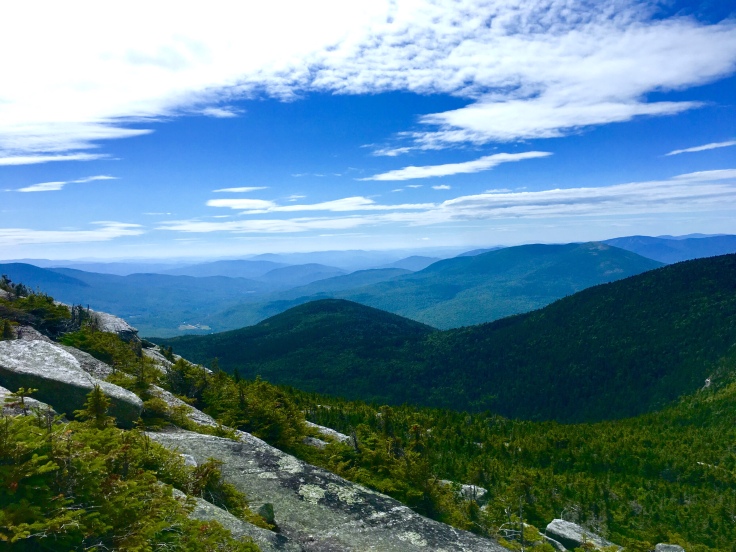 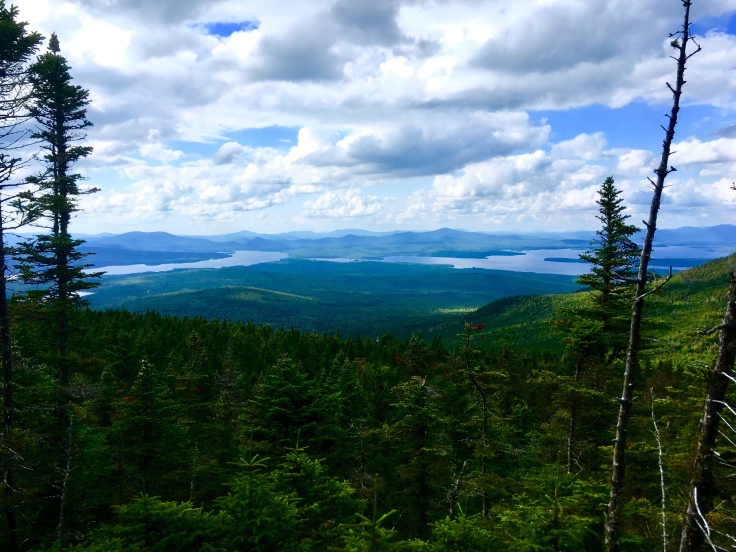 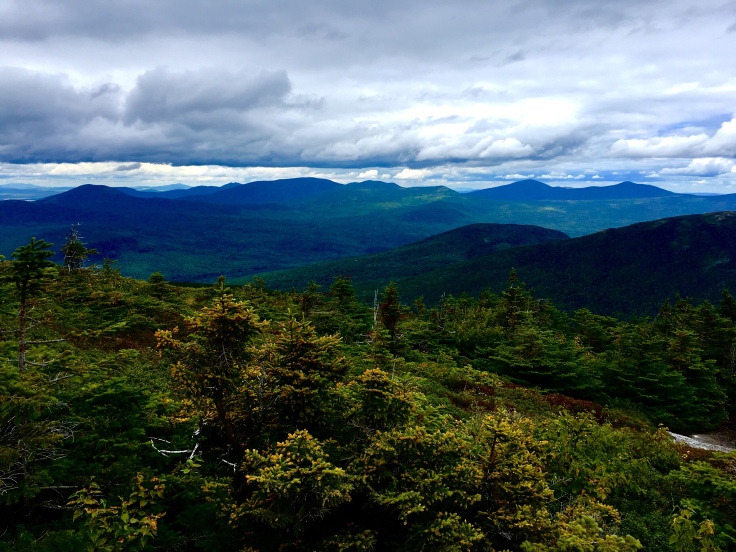